Globular Clusters are ancient balls of stars in the halos of galaxies.  Most that orbit the Milky Way are over 10 billion years old and are arranged spherically around the galactic core.  It is axiomatic that the most massive stars run out of fuel quickly and at this epoch, there are few to none stars more massive than our Sun in Globular Clusters as they are older than the total projected life time of that type of star.  Any star less than 6 Solar Mass ends up as white dwarves as they shed their outer layers in a strong stellar wind either during or immediately after the Red Giant Phase rather than blow up in a super novae.   The small stars that remain currently are burning hydrogen and will have long lives of around 10-trillion to 25-trillion years.

The myriad stars in a Globular Cluster, typically a half million to over 10 million stars, gravitationally interact.  The more massive stars slow down and fall to the middle of the cluster, while the lighter stars speed up and migrate to the outer layers of the globular cluster.  This results in white dwarf stars that have lost most of their mass at the end of their lives migrating to the outer shell.

It was long held that most of a stars mass would be lost during the highly energetic Red Giant phase developing a strong stellar wind.  But, recent studies have shown that white dwarves that should have left the core long ago if that were the case are still lingering.  That indicates that the mass loss happened after the Red Giant phase and happened rather suddenly at the end of the Red Giant phase to have those remnant white dwarves in the core area.  We have yet to observe a Red Giant evolve into a white dwarf.  Much remains to be learned about that process.  This data brings some new theories to the surface about how low mass stars evolve into white dwarves and the sequence of events leading up to it. 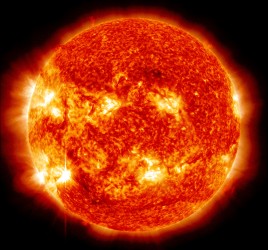