Star Gaze Hawaii was established in 1992 to do stargazing using excellent optics accompanied with stimulating star lore. Astronomy, besides being a scientific endeavor, is a deeply personal act of exploration. In no other science can the novice actually view the raw data and make personal impressions.

With the aid of our astronomer tour guide, we seek to provide as much background information as possible to help you to understand what is being viewed. Physics concepts are explained in layman’s terms and pictorial explanations will be given. We wish to share the awesomeness of the Universe with everyone.

Our equipment is maintained to high standards and our optics are limited only by the atmospheric conditions. We stress that each participant focus the telescope to match their eyesight.  Each individual has different eyesight in the darkness due to dilated pupils. Shallow depth of field results require different focus settings for each person. Best focus maximizes the viewing experience.  Our methods are time tested and unique.  Our selection of deep space objects to view is tailored for visual impact and to expand the viewer’s horizons. 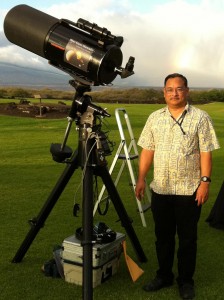 The Founder of Star Gaze Hawaii, Wayne M. Fukunaga, found his life’s calling, astronomy, in September of 1962 as he first looked through a telescope at the Planet Venus.  Venus was a bright dot in the evening sky, but the telescope revealed it as a tiny crescent.  This led to a hunt for all of the planets with a 1” diameter telescope. Jupiter’s 4 moons were revealed as well as the color of Mars.  Saturn was a blurry oval.

Voracious reading of anything related to astronomy exhausted the local library’s resources.  A life-long pursuit of Astronomy and Physics developed.  Astro-Photography became a passion and he became highly proficient in a darkroom.  Wayne attended the University of Hawaii in 1974 and pursued a degree in Physics.  Along the way, he was offered a full time job in Photofinishing lab work.  He earned a certified Photofinishing Engineer certificate in 1978 and worked in Photofinishing labs from 1974 until 1981.  Wayne bought a Radio Shack Associate store in 1984 and ran that until 1991.

Then, he started Star Gaze Hawaii in 1992.  Commercial Astronomy has been a full time endeavor ever since.  Astro-Photography is still a favorite past time.

See what our customers are saying!

We’d love to hear from you! Please leave your review on our TripAdvisor page here.