The Hawaiians are Explorers, Celestial Navigators, and Technological Early Adopters

I should first disclose that my Mother’s maiden name is Kailikini and I was immersed in Hawaiian culture since birth, 60 years ago. I have always felt a cultural special connection to the stars and pursued Astronomy and Physics all of my life.

I support the TMT project. I respect the past, but look and live into the future. Hawaiians utilized everything in the environment to the fullest and best use. King Kalaukaua in 1874 accommodated the Venus Transit observers from England and expressed his desire for Observatories with Telescopes to be built in Hawaii.

Some want to keep Mauna Kea Pristine, but in my view that is short sighted and out of alignment with history. Mauna Kea is a resource unmatched anywhere on the planet for Astronomy. The best use is for the future wayfarers of the world to use the TMT and later telescopes at the summit to collect data for the future of mankind in Space. Future Space Navigators should be Hawaiians.

We now teach our children and grandchildren to navigate by the stars, we should encourage them to travel amongst the stars in the footsteps of NASA Astronaut Ellison Onizuka, a genuine son of Hawaii. Hawaiians should lead as explorers do and not cling to the irretrievable and misremembered past.

Hawaiians have a rich history of being early adopters of new knowledge and technology. Kamehameha the First and all of his descendants, once exposed to western technology, eagerly adopted it and utilized it in the Kingdom. Before 1820, there was no written Hawaiian language, but by the mid-1800’s Hawaii was the most literate country in the World. Today, Hawaii has the highest rate of alternate energy adoption in the USA. Our fishing fleet uses GPS daily and employs modern sustainable methods. In my lifetime, I have not ever experienced the rejection of new technology by Hawaiians.

As a child, I ascended Mauna Kea many times and was never admonished by my elders about the sacred nature of the Mountain, it was a gift of snow. Would a sacred place be littered as the Adze Quarry on Mauna Kea is by the ancient pre-contact Hawaiians? It was not until the mid-1970’s that the mountain attained a new status of needing protection due to resistance to the visible blight of telescope building.

Hawaiians descended from Tahitians and the old origins legends reflected that. Mauna Kea as the Piko (navel/umbilical) of mankind’s origins or the Islands Origins (in conflict with Maui and his fish hook legend) from Wakea the sky god and Papa the Earth goddess, akin to Gaia, is nice to hear, but on its face is a false narrative. I can trace that story only back to sometime in the 1970s. Hardly an ancient sacred legend, and possibly a transliteration of the Egyptian Nut, sky goddess, and Geb, the Earth god (husband), myth.

Since many old chants are lost as they predate the written record, anything imaginable can be resurrected. But, then again Hawaiians are proud of their lineage and can trace their ancestry accurately from memory for many generations back to the original immigrants from Tahiti. That was the only way to prove the blood line of Ali’i authority and social status. I and they would have recalled this legend sooner (concurrent with playing in the snow in the 1960s) rather than just for the convenience of protesting Telescopes on Mauna Kea.

As to the apparent lack of native-born Astronomers and only foreigners using the TMT, King Kamehameha the First embraced knowledgeable foreigners as citizens and advisors. Kamehameha the Third utilized many foreign-born citizens in high offices of his kingdom. The Kingdom had no concept of Xenophobia. Their attitude was if you are in Hawaii, you are a citizen of Hawaii, the true Aloha Spirit. Hawaii became a mixing pot very rapidly.

Having the Mauna Kea Observatory Telescopes here in Hawaii has inspired many children to pursue work and a career in Astronomy, Science, Technology, Engineering and Math. It takes a long time to advance to the level of the top 1% of Astronomers in the World who have earned the respect and status to use the World Class Mauna Kea Observatory Telescopes. Eventually, we will have many native-born Astronomers who work in Hawaii doing advanced Astronomy. At this time, we should do as the Kamehameha’s did and embrace these top 1% of Astronomers of the World as citizens of Hawaii.

But, these telescopes are mechanical things that do wear out and go obsolete. They have endured hurricanes and the annual snow fall. Newer materials, designs and construction methods have been invented in these 15 years hence. Maintaining old equipment gets progressively more expensive.

The TMT will be current and far more productive. It will be 9 times faster at collecting light and 3 times sharper than the 10-meter Keck telescopes. We have hit the limits of the 10-meter class and need to upgrade to the 30-meter class of telescope. Imagine your cellphone from 2000 still being used today. Aren’t the 2015 Smart cellular phones better in all ways, especially the camera functions? We can retrofit the old telescopes at great expense, but they were not designed from the ground up to be able to do what the TMT will do from day one.

Save the World with the TMT

The Dinosaurs had no warning of the asteroid that caused their extinction 65 million years ago. We are not immune to the same threat. Asteroids are very dark in color and reflect less than 10% of the sunlight they receive.

Asteroid 99942 Apophis discovered in 2004, is predicted to pass historically close (18,300 miles) in 2029. If it passes through a certain area known as a keyhole, it could be deflected by Earth’s gravity into a collision course with the Earth on April 13, 2036.

The chance of that disaster happening is currently non-zero at 1 in 45,000. The uncertainty in position prediction for 2036 is 23 Earth radii. Apophis is, due to its low reflectivity, of indeterminate size between 690 to 1,080 feet in diameter.

Having more time to prepare would open the option of Asteroid deflection using the gentle pressure of sunlight. By sending an impactor filled with white pigment, we could increase the reflectivity of Apophis and sunlight alone, through the Yarkovsky effect, will push the Asteroid away from the collision course with the Earth given enough time. It could be too late if we limit ourselves to 10-meter class telescopes. For more information: http://neo.jpl.nasa.gov/apophis/.

Knowing that fact alone, can we bury our heads and go into the night just accepting our uncertain fate out of the iconoclastic need to “preserve” a probably false conception of Hawaiian culture? Hawaiians would take action to lead the way into the future using all of the tools available to endure and survive the known hazards to existence. The Kahuna class were astronomers who could foretell the future movements of the planets and were consulted as soothsayers.

Not building the TMT would be akin to not building the Hokulea Voyaging Canoe simply due to misconceptions about Hawaiian Culture. I point to the fact that the Hokulea is a fiberglass ship of modern design and construction materials and methods, not a traditional wooden canoe. Preparation for voyaging is done with modern Planetarium facilities and current weather forecasting databases and tools. Building and utilizing the TMT would be in accordance with the wishes of King Kalaukaua and the true Hawaiian Spirit. 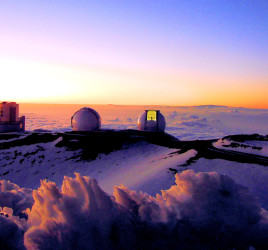 Is it spelled Mauna Kea or Maunakea?